Lettering lessons from Mainz calligraphers:
Gundela Kleinholderman and the Romans 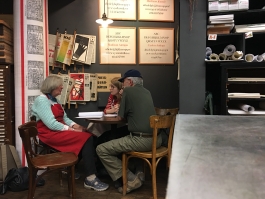 Visiting Mainz was particularly important to me, because of the possibility of meeting Gundela Kleinholderman – a calligrapher and typographer working in printing workshop at the Gutenberg Museum.

According to Mrs. Kleinholderman, the difference between calligraphy and typography is the space. Printing and type-setting is all about flat space – the whiteness of page and the blackness of lettering. Calligraphy does not take place solely on the paper. It is the art engaging the space between the paper and the person who is writing. Hence the movement of calligrapher’s hand is visible only in a limited part. The calligraphy paradoxically exceeds its visibility.

Experiment plays crucial role in her art. As she claims, the future of calligraphy lays not in communication techniques, but rather in pure art. Mrs. Kleinholderman finds all objects as potential writing tools – from credit card to bicycle. She is well known for developing a technique of making calligraphy with ink-roller, traditionally used for applying ink on lead typefaces before being printed. 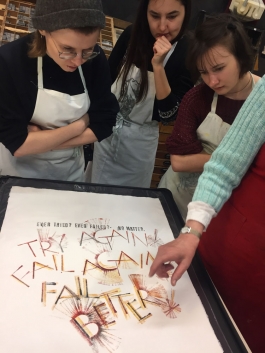 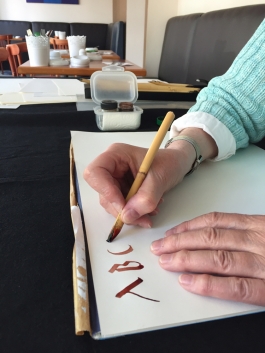 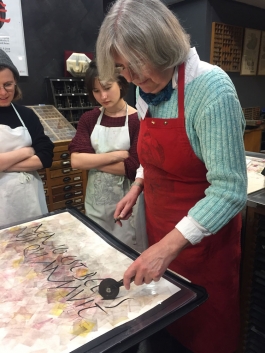 We met twice – for an interview and calligraphy lesson. And today I would like to tell you about the latter, which is strictly connected with Mainz city itself. For Mainz was founded by the Romans in the 1st century BC as a military fortress, Mrs. Kleinholderman organizes here calligraphy workshops entitled “Write like the Romans”. Roman-style writing is meant here as informal, quickly written cursive lettering. The reason for that is that Roman Cursive became something Mainz is famous for. Back in 1999, during construction works for new business center, archeologists came across the remains of double sanctuary. It was something astonishing! It appeared that it belonged to Isis Panthea and the Mater Magna. Among may artefacts, like olive lamps, or carbonated remains of fruits, the researchers found weird and yet intriguing lead rolls. After unfolding them, it appeared that lead plates are beautiful and scary examples of Roman cursive. Beautiful, because of the handwritten lettering, and scary – because the texts written there were curses, the prayers to a deity for making somebody’s life as hard and painful as possible.

Because of the fact that not all inhabitants of the Roman Empire had right to sue somebody in court, the other way for finding a revenge and justice was magic. Especially dark one. The temple served as a place for cursing thefts of jewelry, jealous lovers, or dreadful enemies. The lead curse tablets, or tabellae dejixionis (from Latin dejixio meaning a curse), were part of secret ritual. They were made of material which was easily accessible in Mainz region. Lead remains were to be found as waste from roofing or water pipes. Its advantage was that in normal temperature it was easy to scratch on them. It is interesting that tablets with lettering scratched with light pressure were more elegant and hence, probably written by a literate person (with a lot of experience in writing). Those who practiced less, pressed deep scribe lines in metal surface. 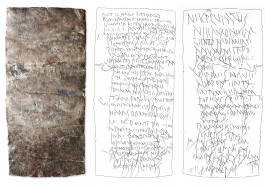 This two-sides lead plate (illustration No1) was written by two persons performing the rite of cursing. The text starts with invocation to goodness: “Mater Magna te rogo…”, which means “Oh, Great Mother, I beg you…”. Then the names of cursing victims appears. Here we have Gemella, who is accused of stealing a jewelry – the robe clasp. After that we have a desired revenge mentioned, which is to be seriously wounded, or hurt (“Let her life and health be taken away.”). On the other side, there are two more women names written with the curse of being eaten by dogs and worms. Those two probably stole jewelry as well.

What I really love here in terms of calligraphy, is expressive ductus of the tool. The composition is one column, although both sides of it are not even. Letters are scratched with multiple movements. But there is an interesting harmony and regularity in the space between letters. The tablet is hardly legible, but it does let us glimpse and share the strong emotions the authors of the curse felt while writing. Imagine how beautiful the robe clasps must have been, that made all “s” letters so exaggerated. In many places the top and bottom curves of “s” letters exceed the baseline and overlap the verse below. All those “s”-letters resembles wounds, or rapid and expressive movements – just like writing “s” letter in such a way would bring relief the one who is cursing. Another interesting feature of the plate is a usage of interlocked lettering, like here, in double “l”.

What creative strategies can we take from this example? 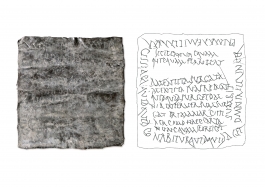 The second example I would like to share with you is the plate (illustration No2) addressed to beautiful Emily – Prima AEmilia, the lover of Narcissus. The plate is prepared surprisingly carefully. The writer composed an invocation text in a shape of frame. To read the first sentence, you have to rotate the tablet. The second part of the text fills the interior of the border. But, as it is often happening in the work of calligrapher, the space we initially considered sufficient, appears to be not enough. Hence, the scribe decided to move the last part of the text to the right side and then above the second part. It’s interesting that he drew a line up to connect these parts.

The curse is given upon beautiful Emily because of the jealousy. Was it for Narcissus? We can only imagine what a charming man he was, if the author of the curse asks for Emily to loose her mind. The ending is a poem by itself: “As this letter can never blossom, so does you, AEmilia”.

This plate is written in an elegant way, paying attention to all serifs. The hands are more even and not so emotionally written. Maybe the woman or man envious for Narcissus was a well-mannered person, able to tame their emotions. Nevertheless, even writing such a hideous curses, he or she thought about the visual quality of composition. Just as the beauty was permeating all aspects of the author’s life. And this devotion to beauty makes the plate so moving.

What creative strategies can we apply to our own letter-thinking?